The original Aikido originated from aiki-jitsu, dating from 9 c. from Japan. The same was included in the combat training of samurais, having the defense techniques as its base.

This technique was studied by the founder of contemporary Aikido – Morihay Ueshiba, 1883-1969, known to thousands of Aikido students in the whole world as O Sensei – The Great Master. As a great expert in the fighting skills, he was not satisfied with any of the existing ones because there was too much violence in them, too many injured or dead. Ueshiba considered all the fights of which the aim was injuring or killing the opponent, worth to be forbidden. 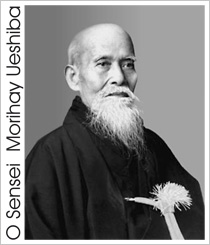 In 1925, all this made him create his own system, and he named it Aikido. Thereby, he made a great leap from Jitsu to the DO system, ie the non-fighting skills. After a deep research, the
However, Ueshiba didn’t want to give people such a dangerous skill and Aikido remained unknown out of Japan until 1948. Then, after the World War II, the situation changed and Aikido started to expand widely.

The essence of all Aikido techniques is to use spherical movements round a stable center filled with energy. Even when it looks as if only one part of the body were used in a technique, a closer view shows that it involves whole body movements. Correctly performed, some of the techniques are spectacular when throwing the opponent into the air. Others are short and quick but stiffen or make the opponent unable to move. This is achieved with the use of the power of the lock, the inertia, the gravity and the action of centrifugal and centripetal forces. All in all, it is the energy of the attack itself that knocks down the opponent.

The practice of Aikido covers a wide field of styles and training, and allows people to train on the grounds of their own individual levels and development. As a result, men, women, and children of all ages can practice Aikido.

History of Aikido Federation of Republic of Macedonia – Real Aikido