REAL AIKIDO is a style of Aikido established by Ljubomir Vracarevik, Aikido Master 10 DAN. It is a practical and efficient skill of self-defense applying superior defending techniques based on the laws of Nature.

The application of atemi vaza is characteristic with the confusing blows into the vital spots in order to distract the attention of the opponent which is quite enough to perform the technique without any obstacles.

Real Aikido reaches its climax in the defense from more attackers. The basic feature is constant, fluid, and rational movement along with efficient techniques, which give sure and high-quality defense.
The practice of this very complex skill strengthens the concentration, coordination, will, decisiveness, self-confidence, resistance to stress, and alike. The main motto of Real Aikido is to effectively overcome the opponent without hurting him physically. Yet, in case of a need, it can be a very dangerous weapon.
Lubomir Vracarevik had trained judo and Ju Jitsu first and won the title Master of those skills. He started doing Aikido in 1968 and continued improving himself with the master Hiroshi Tade 9 DAN.

Ever since he has been intensively working on propagating Aikido.

He went to Japan for the first time in 1978 and he trained with Kishomary Ueshiba 10 DAN, the son of the Aikido founder, Morihey Ueshiba. The special training program for the military, the police and the bodyguards has brought him international reputation. 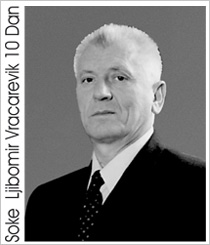 Respecting the knowledge of the Japanese masters, Vracarevik was developing his own style. He selected over one hundred techniques, and by cleaning them and by applying his knowledge of other fighting skills, he reinforced the efficiency and applicability of the techniques, and finally created a Real Aikido style of his own. It is an excellent, flexible and widely applicable system of defensive techniques. The combinations of the techniques depend on the particular situations, and a good movement is an outstandingly important element in reaching maximum efficiency.

While staying in Tokyo for the second time, Vracarevik met Gozo Shioda 10 DAN in Joshinkan, in 1993, and was given a certificate for his participation at the seminar as an approval of Real Aikido on behalf of the great master Shioda. A month later he was given the permission to visit the Royal Palace and on that occasion he met and exchanged experiences with the chief instructor of the Royal Guard.

In 1993, Lubomir Vracarevik founded the Real Aikido World Centre – an organization that directs the work of national federations of over 30 states from 4 continents.

In Dallas, Texas the master Ljubomir Vracarevik was awarded the greatest title for martial arts – 10 dan – soke, as a founder of the real aikido style.

With this improving, the highest in martial arts and sports, Ljubomir Vracarevik has joined the society of a few founders of styles and top world chosen masters.

Master Vracarevik whose name was written in “The House of Famous” in 2002 with the title Grand Master, in 2003 year he became a member of the International Council of Grand Masters (“International Martial Arts Head founders Grand Masters Council” carriers of 10 Dan in different martial arts) as well as a director of the same institution in the South – West Europe. With all these recognition the real aikido entered into the classification of martial art. A great number of received invitations to present the real Aikido on a few big seminars round America, a number of realized contacts with other organizations of martial arts and most of all the presented quality of the real Aikido in front of The International Council of Grand Masters, the real Aikido as the most efficient art of self -defense enters through a wide open door into American Continent.

History of Aikido Federation of Republic of Macedonia – Real Aikido